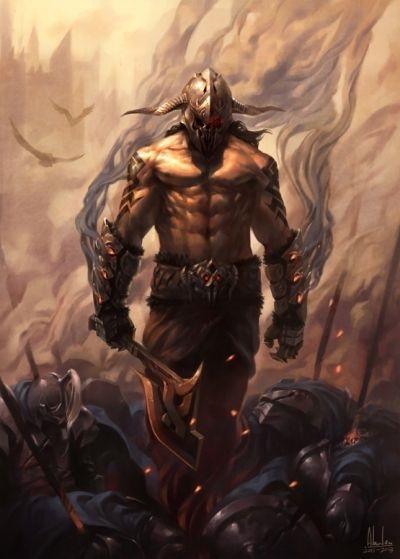 "One does not reach enlightenment envisioning images of light,

but by making the darkness consciuos."

Role: Masters of the battlefield, darkragers unleash fearful carnage on their enemies weakened by hexes, using their combat prowess. The darkrager’s place is on the front lines, right in his enemies’ faces, supplying tremendous martial force bolstered by a trace of arcane magic.

A bloodrager can enter a bloodrage as a free action. While in a bloodrage, a bloodrager gains a +4 morale bonus to his Strength and Constitution, as well as a +2 morale bonus on Will saves. In addition, he takes a –2 penalty to Armor Class. Lastly, the darkrager gains darkvision up to 60 feet. The increase to Constitution grants the darkrager 2 hit points per Hit Die, but these disappear when the darkrage ends and are not lost first like temporary hit points. While darkaging, a darkrager cannot use any Charisma-, Dexterity-, or Intelligence-based skills (except Acrobatics, Fly, Intimidate, and Ride) or any ability that requires patience or concentration.

Shadow Wave: once per darkrage, the darkrager can summon a swarm of bats, rats or spiders like the one summoned with the Summon Swarm spell as a free action, and the effect last as the darkrage lasts. Prerequisite: Darkrager 10th.

Major Shadow Wave: when the darkrager uses the Shadow Wave darkrage power, he can instead choose to summon a Wasp Swarm or an Army Ant Swarm instead the swams of bats, rats or spiders. Prerequisite: Shadow Wave, Darkrager 14th

Grand Shadow Wave: when the darkrager uses the Shadow Wave darkrage power, he can instead choose to summon a Hellwasp Swarm instead the swams of bats, rats or spiders. Prerequisite: Shadow Wave, Major Shadow Wave, Darkrager 19th.

Green Light Eyes: the darkrager gains a +2 bonus on all saves against Enchantment [charm] effects and Enchantment [compulsion] effects while darkraging.

New Hex: the darkrager can select a new Hex from the list of hexes he can know. This power can be selected many times. Every time the darkrager select this power, he must chooses a different Hex.

Shade Attack: once per darkrage, the darkrager can substitue one attack with the highest attak bonus, with a hex he knows. Casting this hex doesn't count for the maximum limit of hexes per darkrage. Prerequisite: Darkrager 10th

Deatheye: the darkrager can determine the condition of a creature near death as per the Deathwatch's spell as a free action. This power can be used a number of times per darkrage up to two times the number of darkrage power the darkrager possesses (two times at 2nd level, four times at 6th levels and so on).

Fiendish Wings: when entering a bloodrage you can choose to have bat-like wings grow from your back, giving you a fly speed of 60 feet with average maneuverability. As soon as you gain another darkrage power, your fly speed increases to 80 feet with good maneuverability. Prerequisite: Darkrager 14th.

If a darkrager already possesses uncanny dodge from a different class, he automatically gains improved uncanny dodge (see below) instead.

Hex: Darkragers learn a number of magic tricks, called hexes, that grant them powers or weaken foes while darkraging. At 1st level, a darkrager gains one hex of her choice. She gains an additional hex at 6th level and for every 3 levels attained after 3rd level, as noted on table: Darkrager. A darkrager cannot select an individual hex more than once.

A Darkrager can uses his hexes only while darkraging. Unless otherwise noted, using a hex is a free action that does not provoke an attack of opportunity. The darkrager can use up to one hex per darkrage. This number goes up to two hexes at 6th level, tree hexes at 11th level and four hexes at 16th level. The save to resist a hex is equal to 10 + 1/2 the darkrager’s level + the darkrager’s Charisma modifier. The Hexes available to the darkrager are listed here: Best of Hill Omen, Blight, Cackle*, Child Scent, City Sight, Congeal, Coven, Cursed Wound, Discord, Enemy Ground, Evil Eye, Feral Speech, Fortune, Gift of Consumption, Greater Gift of Consumption, Misfortune, Murksight, No Place Like Home, Peacebond, Poison Touch, Scar, Sink, Soothsayer, Summer's Heat, Unnerve Beasts, Ward,

Like other spellcasters, a darkrager can cast only a certain number of spells of each level per day. His base daily spell allotment is given on Table: Darkrager. In addition, he receives bonus spells per day if he has a high Charisma score. The darkrager does not need to prepare these spells in advance; he can cast any spell he knows at any time, assuming he hasn’t yet used up his allotment of spells per day for the spell’s level.

The darkrager’s selection of spells is limited. At 4th level, a darkrager knows two 1st-level spells of his choice. A darkrager gains more spells as he increases in level, as indicated on Table: Darkrager Spells Known. Unlike spells per day, the number of spells a darkrager knows is not affected by his Charisma score. At 8th level and every 3 levels thereafter, a darkrager can choose to learn a new spell in place of one he already knows. This swap follows all the same rules as for a sorcerer.

Improved Uncanny Dodge: At 5th level, a darkrager can no longer be flanked. This defense denies rogues (or other classes with the sneak attack ability) the ability to sneak attack the darkrager by flanking him, unless the attacker has at least four more rogue levels (or levels in the class granting sneak attack) than the target has darkrager levels.

If a character already has uncanny dodge from another class, the levels from the classes that grant uncanny dodge stack when determining the minimum rogue level required to flank the character.

Feral Hexes: At 8th level, the darkrager's DC for all his hexes is increased by 1.

Greater Darkrage: At 11th level, when a darkrager enters a darkrage, the morale bonus to his Strength and Constitution increases to +6 and the morale bonus on his Will saves increases to +3. In addition, upon entering a darkrage, the darkrager can cast a spell he knows of 2nd level or lower that inflicts a penalty to some check or any malus or that deals damage to a target as a free action. This use consumes a darkrager spell slot, as if he had cast the spell; he must have the spell slot available to take advantage of this effect.

Tireless Darkrage: At 17th level, a darkrager no longer becomes fatigued at the end of his darkrage.

Greater Feral Hexes: At 18th level, the darkrager's DC for all hix hexes is increased by 1. This bonus stacks with the one granted by Feral Hexes.